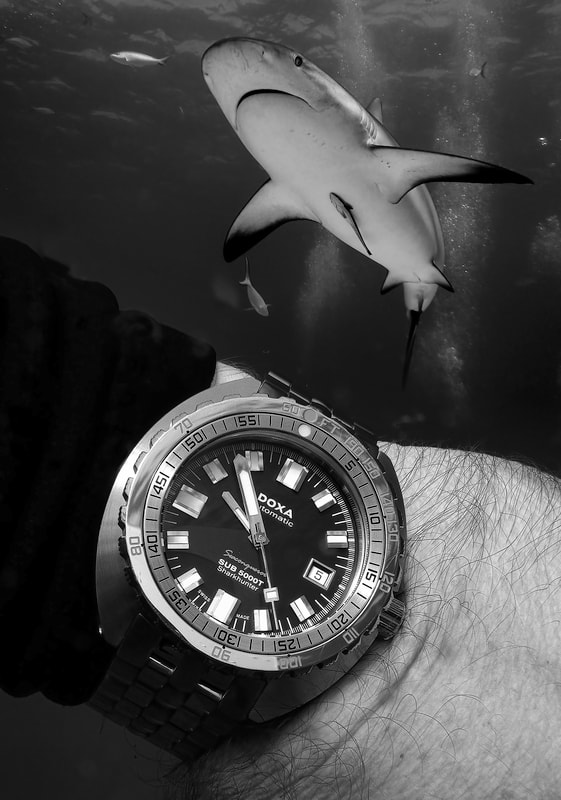 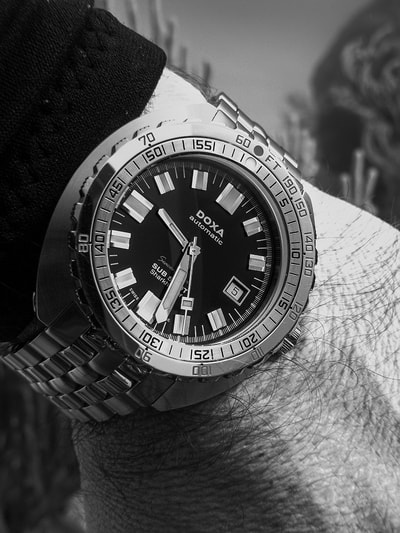 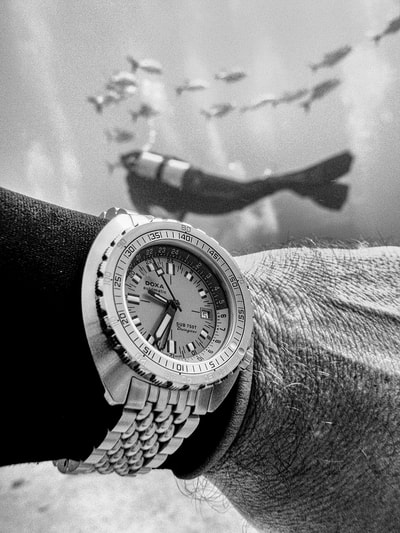 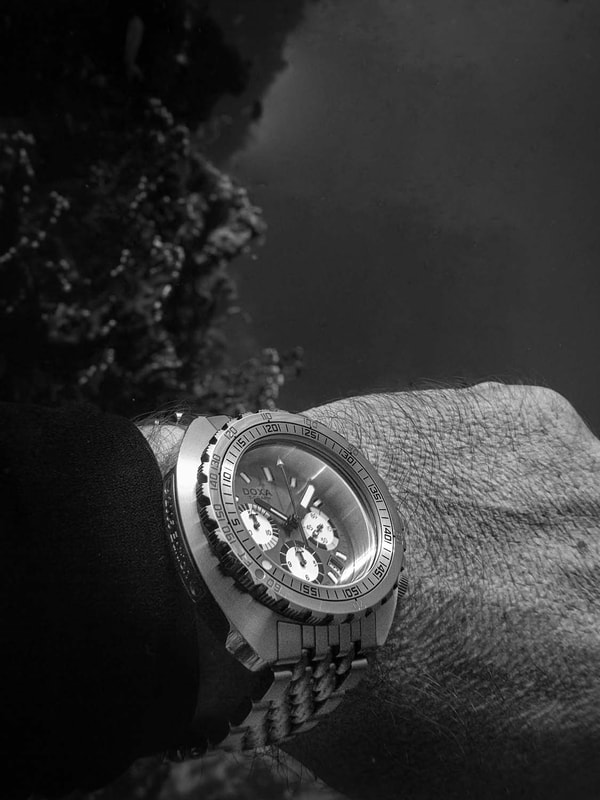 ​Greg Bottle worked for DOXA Watches as a freelance designer from 2004 to 2019.
​During his time with DOXA he created conceptual watch designs that were put into production, designed, built and maintained their website, numerous advertisement designs and campaigns, email marketing, design of the DOXA book layout and may other graphic designed material they used between 2004 and 2019.
​DOXA watches evolved from a small private label in 2002 to what is now part of the Walca Group in 2019.
​
​"I achieved what I set out to do and my mission was now complete, it was time for me to find new challenges and less well known brands to help them evolve and build into a bigger, more well known brand name, like DOXA has become."

​In 1999, Rick Marei approached the owners of DOXA (the Jenny family) with a plan to re-launch the DOXA SUB line. Rick had been quietly studying the shift in the watch industry. He noted, as some others had already, that there was a growing appreciation and demand for non-quartz watches. But more than this, he also saw a real demand for unusual and unique design – and the DOXA SUB fit the bill in both categories.

Rick was clearly cut from the same cloth as Georges Ducommun and Urs Eschle, as well as the Jenny family – he appreciated and valued the traditional watch making techniques and shared their belief in Swiss craftsmanship. But as with DOXA’s other innovators he did not live in the past. While he built on DOXA’s rich history – he always had his eye on the future. And just as the DOXA “forefathers” had taken existing ideas and moved them in new directions, so did Rick. Georges, Urs and the Jennys had been creative innovators, not willing to merely do things as they had always been done. This is what had driven DOXA innovations such as the 8 day movement, the orange faced diving watch and the Helium Release Valve. Rick felt that the traditional sales channels did not provide adequate opportunities to share the DOXA story. It was the internet where Rick placed his faith, where he would spread the word about DOXA. And so, in 2002, Rick and the Jennys reissued the DOXA SUB – for sale ONLY on the internet!

In 2004 Rick approached Greg to work with them to improve website presence, produce CD catalogue content, Flash based watch manuals and custom dial graphics for their limited edition SUB watch range. In late 2006 Greg was asked by DOXA to come up with a new design for what was then going to be the "Conquistador", DOXA's flag ship watch.

Evolution of the DOXA SUB

Greg's original concept for the SUB 5000T was “the evolution of the world's best dive watch”.
​
"I wanted to make a modern looking, practical, professional dive tool while still retaining the DOXA heritage. I originally wanted to lose the date window as I wanted all markers on the dial to have Super-LumiNova, as one doesn't really need to know what the date is when one is underwater, whereas a dial with all markers having Super-LumiNova is way more vital on night dives or low visibility diving. I also wanted to beef up the minute and hour hands to give a bolder design while also having more Super-LumiNova on the hands. I also wanted an “oyster” style strap, and beefier case to change the look of the watch totally while still retaining the classic DOXA identity." ​
The final design that went into production was changed slightly from Greg's original concept, and he had to add a date window in and the hand were changed back to original style DOXA hands with the dwarf hour hand. The bracelet design was changed to a more modern rice bead style bracelet.

The DOXA SUB 5000T "Seaconqueror" was launched in 2007 and proved to be very popular and highly successful for DOXA selling out all 5000 limited editions in only a few years. It became DOXA's most successful re-edition.

Download File
A few more examples of ​other SUB watch designs that were created for DOXA Watches and put into production. 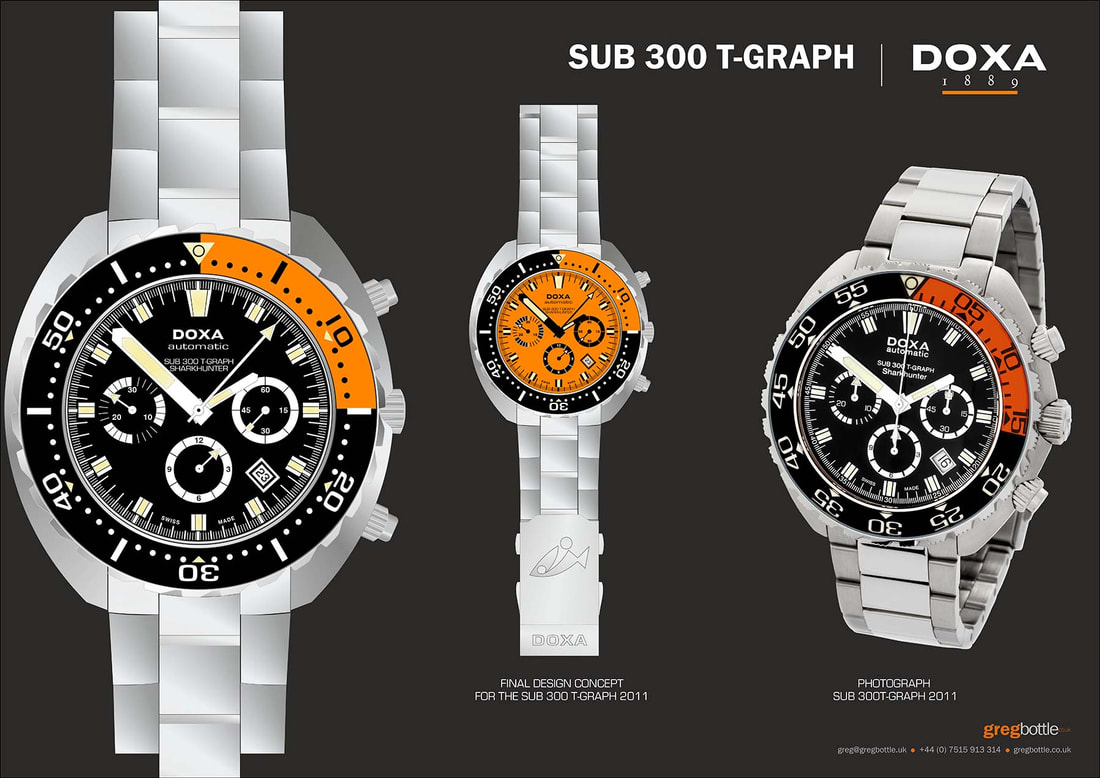 Re-design/re-drawing of original vintage T-Graph dials.
The DOXA fan bases were asking for this original dial version over the then current 3 sub dial version.
The original one Greg produced was the silver dialled Searambler, which had a very limited run of 50 watches.
These days the Searambler version is a highly desirable watch and doesn't come up on the second-hand marked often.
All of these limited editions sold out pretty quickly. 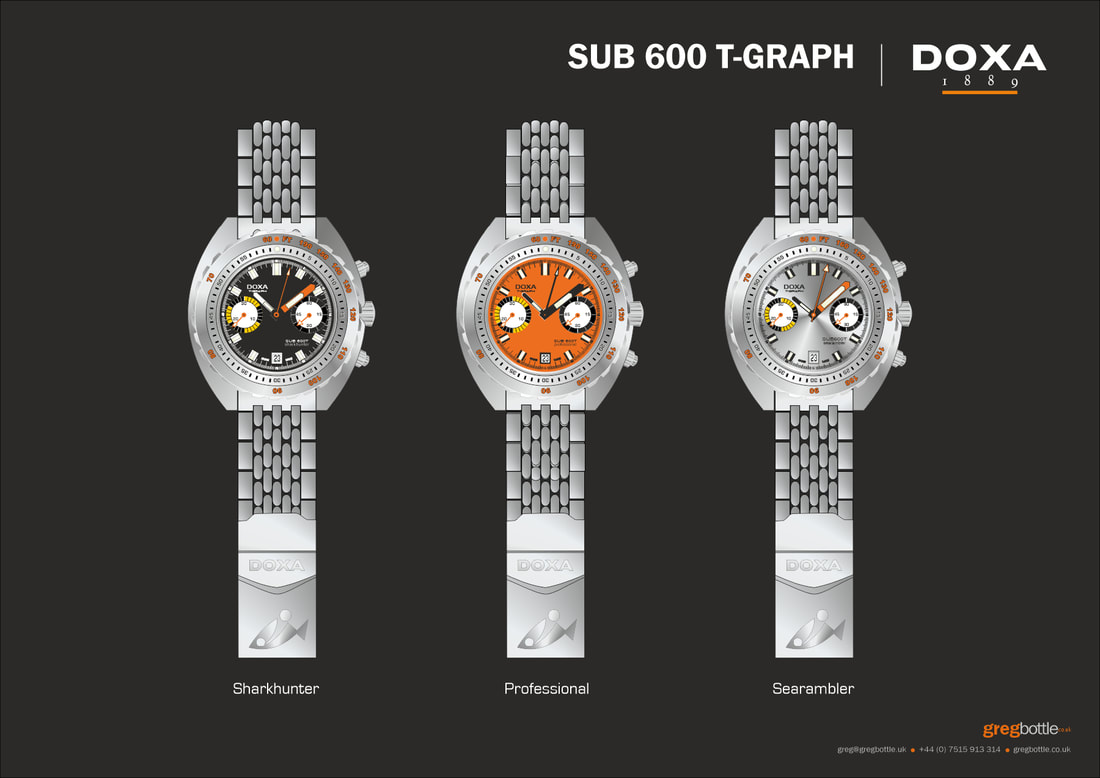 Some conceptual watch design drawings created for a new DOXA SUB, but have not been turned into reality, yet.
"I was always looking to produce a more modern looking SUB to evolve the DOXA brand as far as I could." 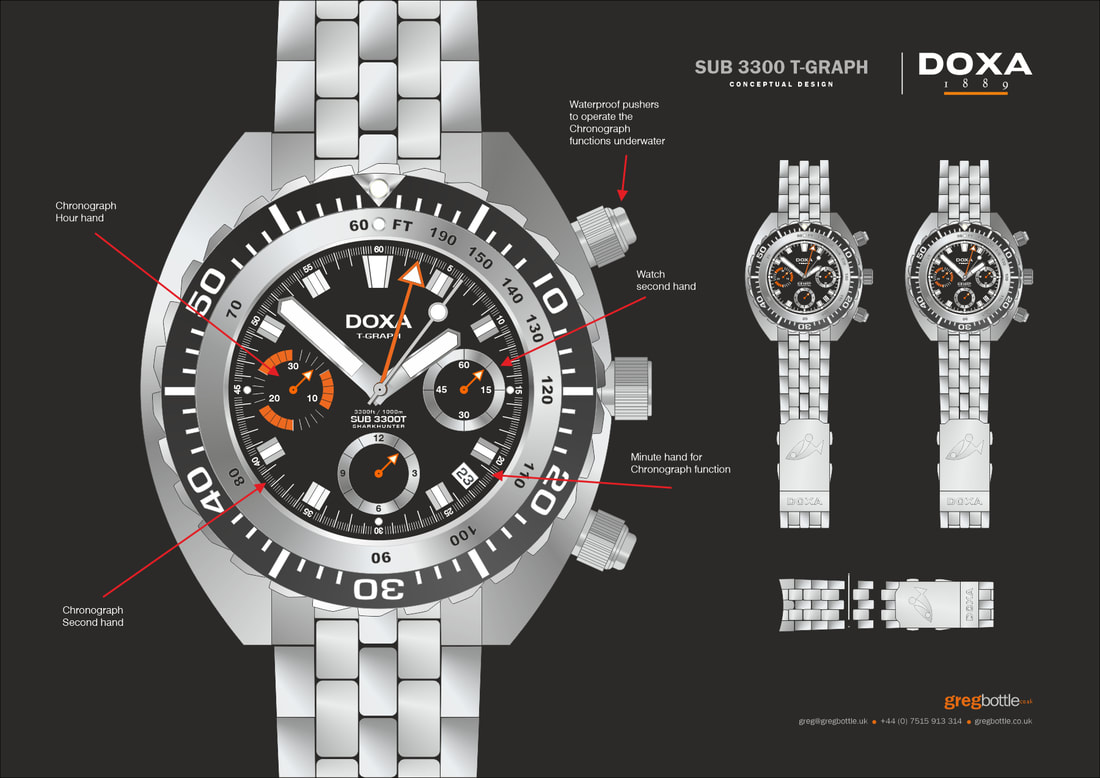 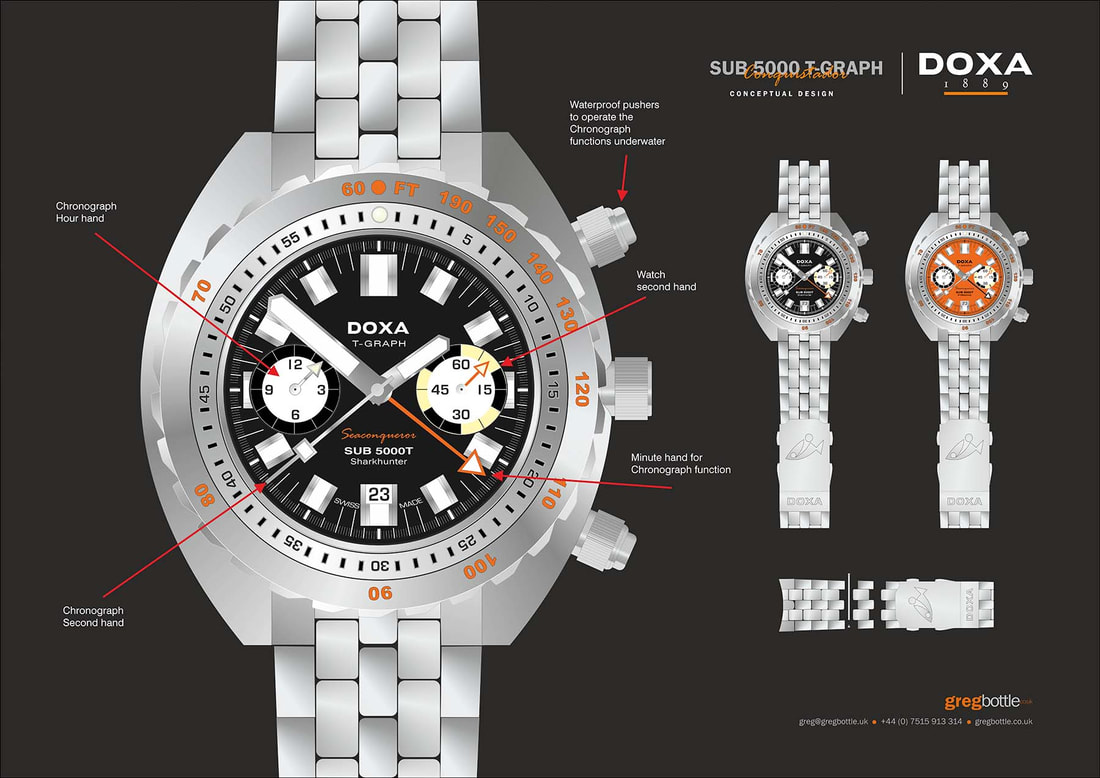 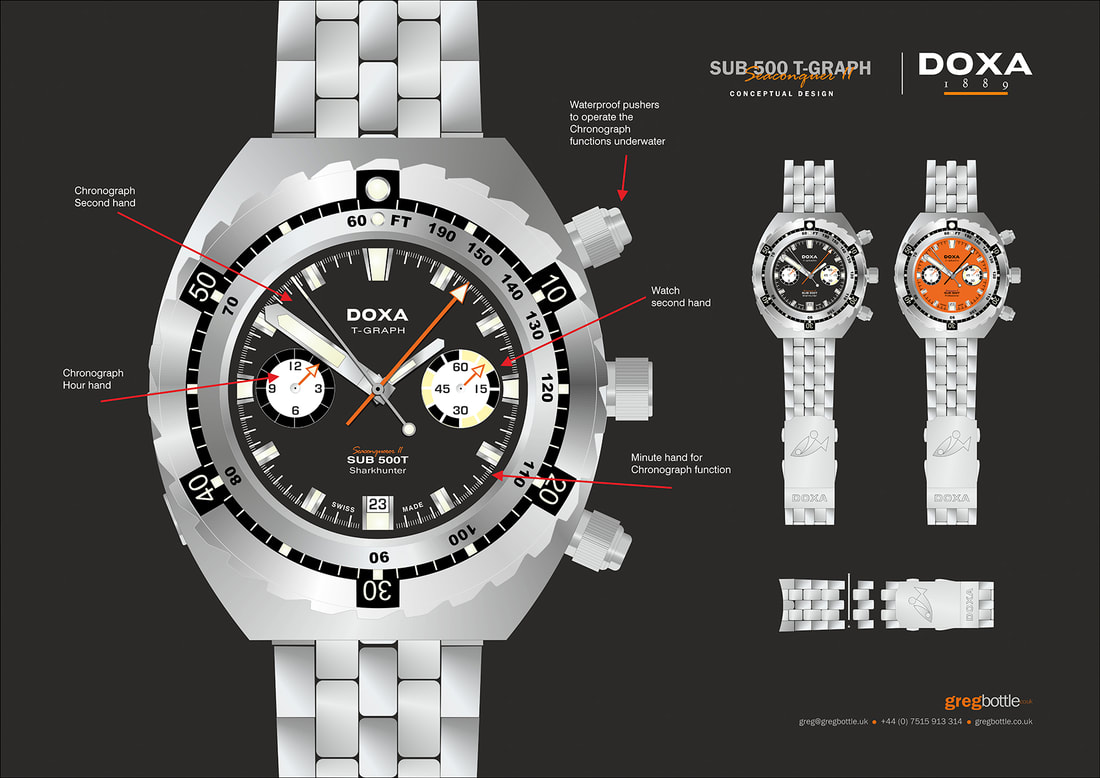 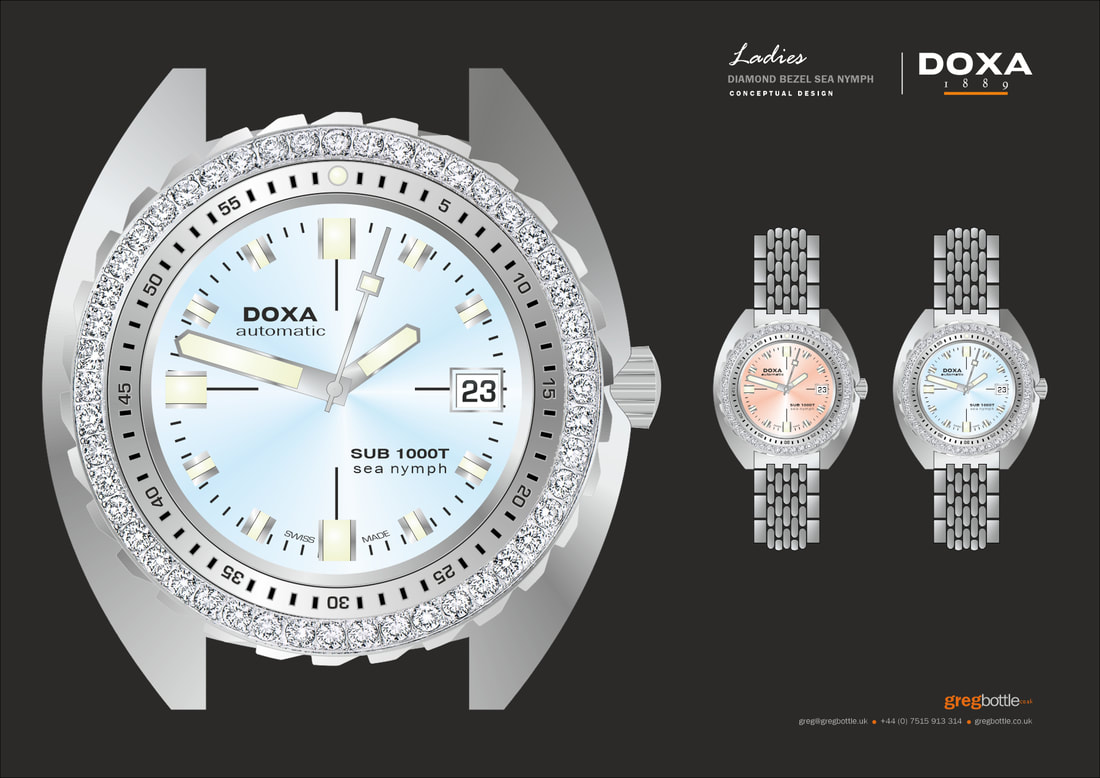 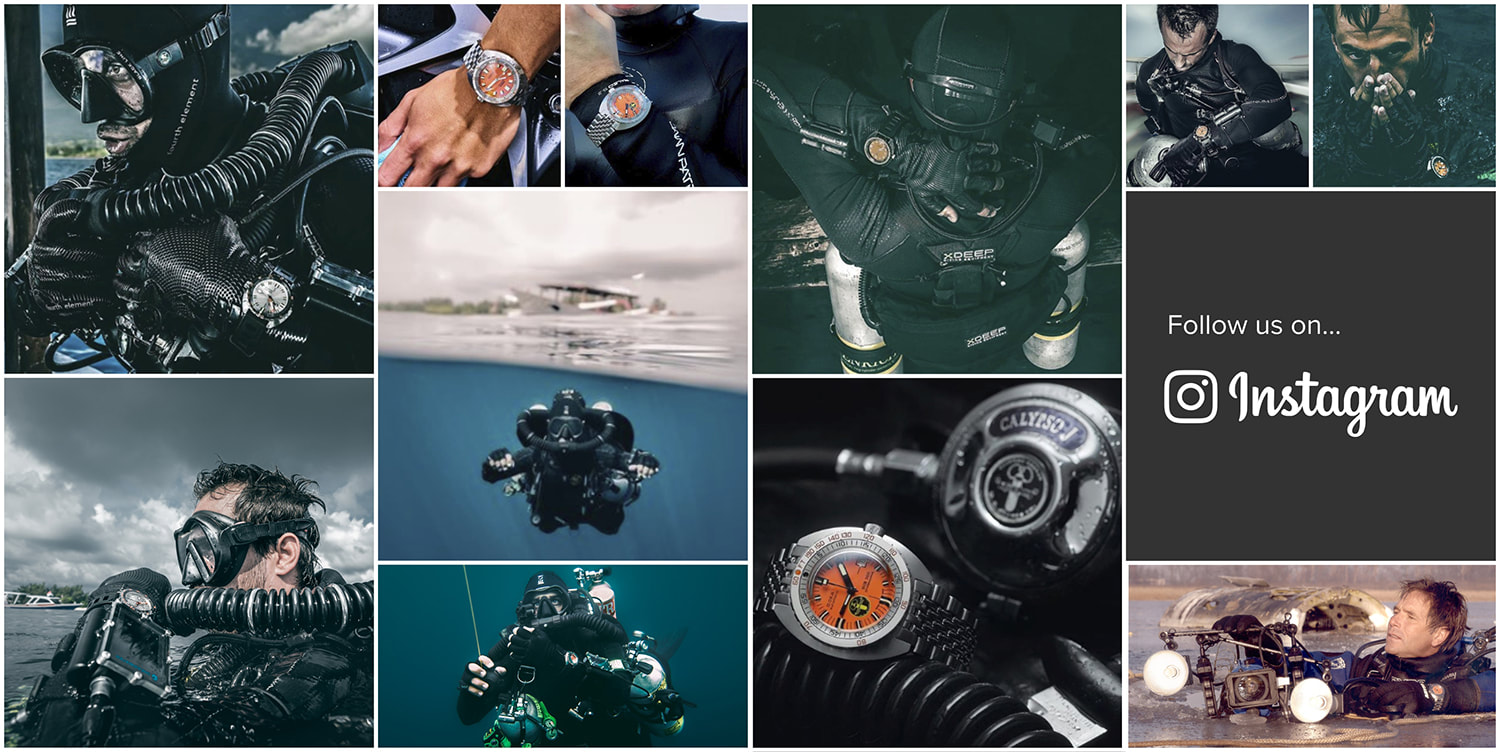 Greg Bottle is a renowned specialist in creating conceptual watch ideas and designs for the dive watch industry, including for brands like DOXA, Aquadive, Stowa, Hadley Rille and Heinrich.

An experienced diver himself Greg understands the importance of great design and is passionate about his work.
"Being a diver I understand what I need and look for in a dive watch, so I'm driven by a passion and an obsession to create my perfect dive watch and love being involved in the whole process of watching my creation come to life”.

Greg Bottle works closely with you throughout the design process and by carefully listening to your needs Greg is able to deliver a selection of conceptual watch designs to choose from that often exceed the expectations of his clients.
​“I pride myself on exceeding my clients expectations”

“I want and expect my watch design creations to do very well and be highly successful for my clients, so I'm always willing to go above and beyond with additional creative marketing ideas, watch manuals and also offer website, advert, social media and other promotional services. My passion and involvement doesn’t stop when the watch design part is completed. I worked with Rick Marei and DOXA for over 16 years doing all their graphic and website design work, that kind of shows the committed and passion I have with a brand”.

“I love working with clients that I get on very well with and I can help grow and elevate their brand, it is where my creativity skills can be utilised the most. I almost crave this kind of challenge, so my skills are best suited for smaller watch brands and even micro brand start up companies that are looking to produce a well designed quality built watch and want to get to the next level.”

Click here to see my other conceptual watch design work

If you would like to discuss a watch design project and your requirements please use the form below.
To enquire about other graphic design projects please click :